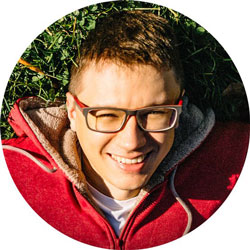 I have experience of working as a freelance designer and developer. As a designer 🎨 I did prints and web UIs with Photoshop and Illustrator. As a 🛠 developer I had my hands on popular PHP projects — vBulletin, phpBB, InvisionPB, Mambo-Joomla, ActiveCollab and Wordpress. Also I've sold hosting services and done some DevOps work for my clients.

I've been co-founder of cafeteria.ru project where I had opportunity to work with great Engineers and Sales Team as a Product Manager.

In year 2015 me and my lovely wife started first Belgian Waffles cafe in a city — Waffle Street. Fun fact is that we've had that name before the movie Waffle Street hit the theateres 😉.

I really enjoyed working with real people and serve to our guests but now I want to return to online world to catch up with new technology and hopefully become a part of a large worldwide corporation and grow as a Product Manager.

As a hobby I really like playing acoustic guitar 🎸 and travelling 🏝.